Back in 1982, The Secret was published, and a treasure hunt began across North America for keys hidden in ornate boxes in public spaces.  The keys were meant to be traded for gems from the author. Unfortunately only 2 of 12 treasures were ever found before the author was killed in a car crash.

There have been a few articles written about the treasures, called the Byron Preiss treasures.  Urban Milwaukee did a feature in 2013. Probably the most complete place to search for information might be at Wiki, where it's called The Secret (a treasure hunt).  The page is being updated, and if you find clues you can add to what is there. The book is no longer in print and our library system doesn't have a copy, but what you need is on the Wiki page. Here's the painting that they believe is a clue to the Milwaukee treasure, and you can find a poem which goes along with it.. The symbolism has been somewhat decoded at the wiki page, though I disagree with some of it.  The castle= city hall. The balls look like lawn bowling balls (though they say golf), mill stone (there is one at the ravine), and the cloak has what appears to be a birch grove. Inside the box is a key, so therefore a picture of a key.  This led some people to believe the treasure was buried in Lake Park somewhere. 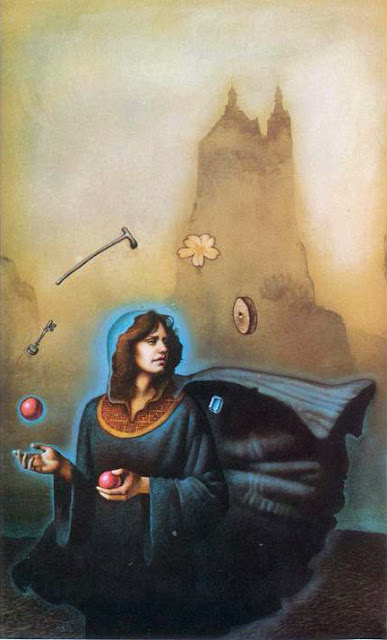 I had never heard about the treasures until I was contacted by a Milwaukee resident this summer who was looking for information about Lake Park. He asked about a grove of birch that might have been standing more than 30 years ago.  Unfortunately, birch don't tend to live very long and there is no indication of a birch grove now. I didn't think too much about it until I came across a photo last week at the Milwaukee County Historical Society.  They have boxes of old photos from every nook of Milwaukee. You have to pay $5 to use the research library, located upstairs.  If you find something you'd like to have copied, it's 25 cents.  Here's the photo I had copied. 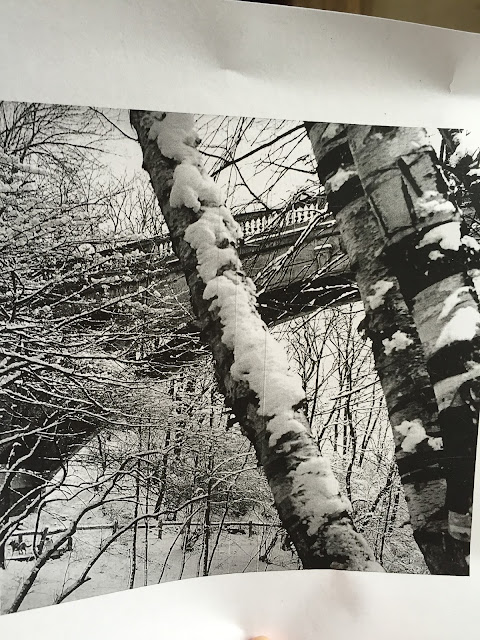 None of the bridges look exactly like this anymore.  It was a photo taken by an instructor at UWM during the 70s, and those clearly are birch trees.  I went to Bridgehunter and discovered that this is the footbridge over the ravine- north of Lake Park Bistro.  That's a great website with photos of nearly every bridge over time.  You can waste a lot of time there if you're looking for something to do this winter.  Ha!

So now it appears the clues have indeed led us to a specific place in Lake Park.  The question remains whether anyone will find it.  If you do, I'd love to hear about it!

Update 2019: There has been some activity on the search. You can watch this YouTube video series by Arm to the Chair Productions The Secret Treasure Hunt.
Josh Gates from Expedition Unknown did a segment which aired in January 2018 featuring Milwaukee.
Update: It's 2020. At least 2 different parks have been explored and neither turned up treasure. I just received input from a Canadian who believes the treasure might be in King Park. Here's what he wrote: My name is James and I am a resident of Nova Scotia, Canada home of the world's oldest treasure hunt, Oak Island.  I have some unique discoveries concerning a decades old book contest "The Secret, A Treasure Hunt" that was showcased on the television show Expedition Unknown.  There has been a long-standing belief that one of the twelve treasures is in a Milwaukee park and I believe I have located it in the middle of the football/rugby field found within King Park.   I attached documents that provide some contest background as well as my interpretation of the Milwaukee location clues.
I have been a GIS practitioner since graduating in 2002 and currently serve as a Technical Analyst - GIS for Nova Scotia Lands Inc..  It was my geomatics background along with Milwaukee's robust GIS data repository that provided all I information needed.  I thought it might be of interest to the King Park community to complete an actual treasure hunt right in their own neighborhood.  They have been digging up other Milwaukee parks for many years and will continue to do so until this item is located.
Where I reside out of country, I have made this information available to local agencies to do with as they see fit.
Thank you for your time,
James
Painting #10 Clues Deciphered

- Juggler has 7 items, 4 make up the month indicators

- Litany of the Jewels provides link to Germany

- Prior discovery that puzzle is for city name (in reverse order)

- Prior discovery of Milwaukee City Hall outline in painting

path start and end are the same spot, the exact middle/center of the football field

At the place where jewels abound (Location Clue)

Fifteen rows down to the ground (Location Clue)

In the middle of twenty-one (Final Treasure Site)

From end to end (Location Clue)

• “middle of twenty-one”†is the middle of US football field, 21 lines make up field

only use 3 officials to†“watch”/officiate the game

As the sound of friends (Location Clue)

- Clue to the (original) baseball stadium nearby

Their heads for a night (Identified Quote)

- It’s†a†misdirection, I found another St Charles Hotel in Milwaukee (very near city hall) that is

connected to the one in New Orleans

Milwaukee. His goal was to recreate the majestic St. Charles Hotel in New Orleans, after spending many

happy hours there after the war.

Near this site. (Location Clue)

I believe I have discovered a new clue in solving this..
This is a huge clue, please contact me..

Hello, wanted to let you know that I have solved the clues for locating the Lake Park treasure from the book The Secret, and will be posting a video on my website in a few days that shows how to find it. Thanks.

I have also found clues for the hands and the woman playing harpsichord. If any one is serious and does not just have the ideas that have been posted all over the internet, I would like to talk.

Hi Barbara, I was the person who Emailed you all those years ago. Seems like you got the bug too now ;-)

it is by that sewer

To buy Barbara's Books, The Milwaukee Bucket List or 101 Things to do in Milwaukee Parks

More Information about Me and My Books